This past weekend I organized a local Ludum Dare meetup in my hometown, Coimbra. For those of you who haven’t heard of it, Ludum Dare is a game making competition that is held over the Internet three times a year. The goal is for participants to create a game in a weekend related to a theme announced at the beginning of the event.

It was held at Casa das Artes, a great place to organize this sort of events. I'd also like to thank them for their hospitality! We had the attic for ourselves which resulted in a very productive environment for all the participants. 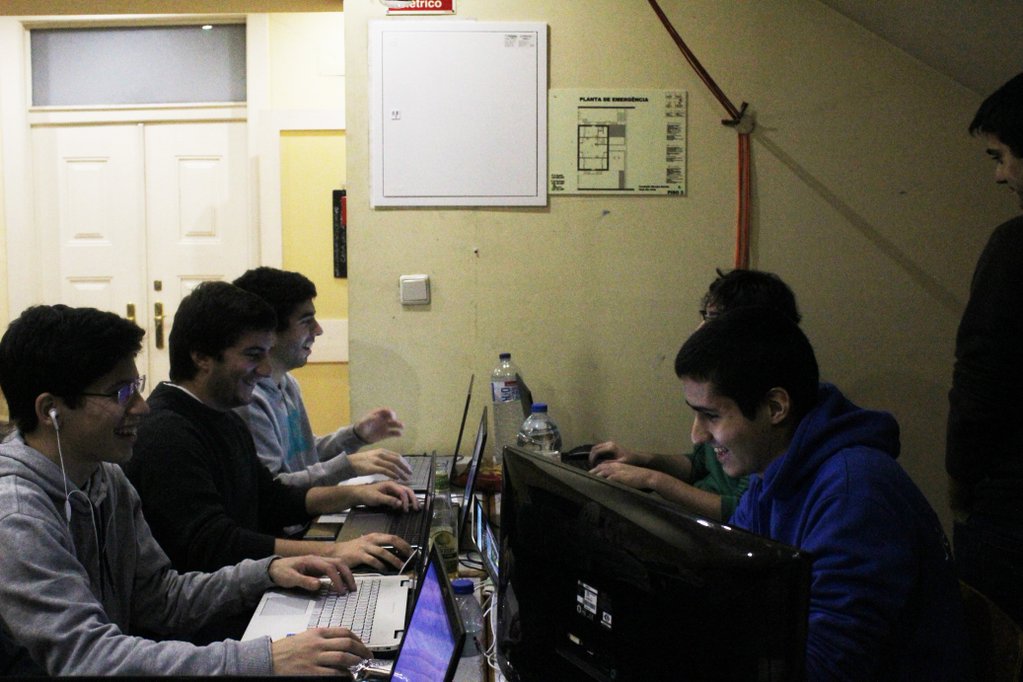 Below is a list of the games that were made in this local meetup. I'd like to thank you all for attending and congratulate
you all on your brand new inventions!

A Choice of Weapon by me

”a choice of weapon" is a simple 2D shooter where the player can choose between using a powerful sniper or a messy machine gun. They're both useful, but in very different situations. As so, the player uses the two mouse buttons to control which weapon to fire. I decided to follow the "Two Button Controls" theme. In addition, the game features synchronisation with the music so the difficulty of the game is based on the music.

A deadly supernova is threatening the existence of our entire universe! It's up to you to contain these massive powers of destruction, with the help of your spaceship, the Ortogonalis, a unique vessel with Hyperspace travel capabilities.
Goal:
Contain the supernova by closing the hyperspace borders (blue borders). You do this by changing the color of the borders from Blue to Purple.
Don't let the supernova grow into it's maximum size, or else we're doomed!

Hexirus is a simple strategy game.
You have to control and contain a virus. Prevent it from growing. For that you may use two buttons:
-Left Click to place a cell that blocks the virus from growing. You have limited cells to place but with time you will get more . So use them wisely.
-Right Click to save a cell. But careful you only can save 2 cells!!

This is a platform game that you can only use two buttons to reach the end. The player chooses two keys to play, one to choose the action, the other to execute it.

This is a game where coordination and skill predominate. You've to pass the obstacles but be aware, sometimes gravity changes. We developed this game on Love programming language. Sadly, we were not able to put much time on this, but knowing that this is our first game and our first appearance in ludum dare, the overall experience is very good.

Try to catch the blocks on the right and drop them in the right place. Controllers and music make it tricky.

The Idea Button by Miguel Murça

Okay. Two buttons. I can do this.

SaBeeIt, it´s a game about a bee collecting nectar from flowers to save in a hive. You have to avoid the power electric transmissions from getting an electric shock. :p
Objective: Save nectar in the hive located in the end of the map (in this case). Note: There are some flowers that give more nectar than others.

Also, I made a timelapse of the development of my game, check it out: